Following last weeks squeaky bum victory at Coney Hill Old Es were looking forward to the much anticipated return match against Dings Crusaders II .
This much awaited rematch also drew in a capacity crowd with approx 60+ lining the pitch.

MATCH REPORT: So Dings kicked off and carrying on from last week it was a good receiving catch by Adam Skyner. The first scrum sort of set the scene for a torrid afternoon for the Es' forwards when Dings drove us off the ball. Dings were applying pressure from that moment onwards and a wrong pass direct to a Dings player almost gave Dings an opening score but a resulting scrum on Es' 5m line was very well defended and although Es were in spits and starts starting to look promising there was a lot of scrappy handling and the pressure applied by Dings was forcing mistakes. It was 9 minutes into the game before Es ventured into the Dings half but it was short-lived as Dings scrum half broke away and but for a great tackle from Will Appleton they would have scored. A scrappy bit of play followed from Dings and taking advantage of this Will Tobin scooped up the ball and broke through to score an unconverted try a little against the run of play (5-0).

Another great restart take from Adam but not much else to shout about. Dings set up their scrum on the Es' 10m line and their scrum half once again broke free passing the ball to an agile No.15 who evaded a couple of tackles to score a converted try (5-7).

Es tried to get back into the game and soon after were rewarded with a Penalty Kick which 'Cool Hand' Luke Jagger slotted between the posts (8-7).

Will Appleton was putting himself about and putting in some good tackles but no-one could stop the big Dings Prop who smashed through to score a converted try (8-14).

Es were continuing to struggle to put phases together and the scrum was suffering although the lineout was working well and with good tackling from the likes of Pat Dore Es were still competing, however a Dings lineout saw their forwards storm through for another converted try just before Half Time (8-21). Dings started the second half strongly and a kick for a 5m lineout led to their forwards once again scoring an unconverted try (8-26). This was followed only moments later by a further good converted try from Dings (8-33) with their No.6 doing a lot of the damage.

Es looked shell shocked but following a good run and hand-off from Greg Foord Es were awarded a penalty taken quickly by Appleton whose pass to Will Tobin saw him score his second try of the day with a great extra 2 points added by Luke Jagger (15-33).

A great run from the restart from Herbie Gale seemed to spark him into life but everything Es tried came up against a determined Dings defence and when they were awarded a penalty quick thinking caught Es asleep which led to another Dings converted try (15-40).

Es continued to play with spirit hoping to notch up a bonus point if they could get themselves another couple of tries, but Dings stood firm and continued to look the team more like scoring. Good play and tackling from Will Tobin, Joe Watkins and Herbie Gale were bright spots before Dings rounded the game of with a well deserved final unconverted try (15-45).

Yes a disappointment for all, but Es showed great spirit and kept battling despite everything.

Man of the Match: Will Tobin and a special mention for Ben Barnett for his high tackle count!

Next week sees a tough return match against Frampton Cotterell (Away). The following week (29th Jan) sees Es take on Hucclecote at home before a further home fixture on 5th Feb being the pre Christmas postponed game against Cheltenham Saracens. 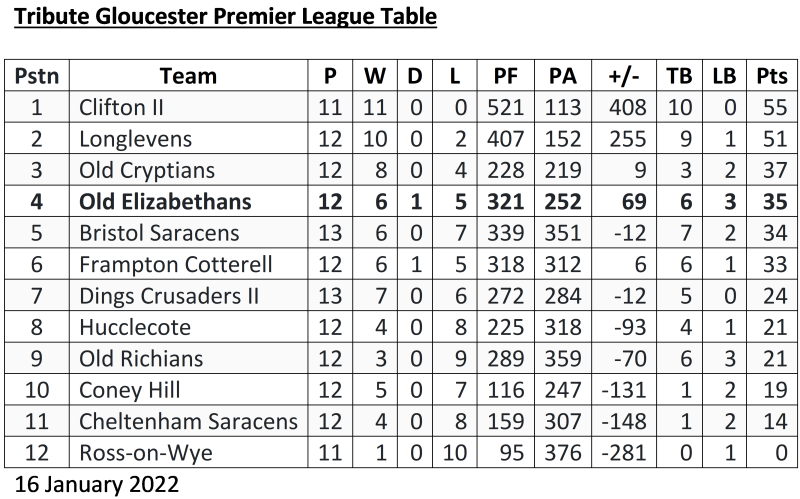