Possibly the toughest opposition we'll get this season Apologies that I was unable to provide a report for last week's home match against Bristol Saracens! For today's game vs Clifton II the conditions were dry and perfect for a game in which Es hoped to bounce back. It was also the first match to be broadcast live via the Veo Camera/App.

A big thanks to all of the travelling support.

MATCH REPORT: Before kick-off we all participated in a 1 minute silence to recognise the passing of Queen Elizabeth II.

It was my first opportunity to see Matt Hudson and Monty Nash in action and both played a good game and looked like really good additions to the Es' squad. Matt indeed took the opening kick-off with a clean catch and thundered into the opposition to set Es rolling. Indeed, Es started strongly and despite ongoing problems at the scrum, the lineout was working well. Although Es had a strong start it was Clifton that nearly took the first scalp but the ball bounced kindly on our try line and a good clearance followed.

Some good attacking followed from Es and a series of three moves down the left-hand side with great skills from Tobin finally putting Alex Potts in for a well worked and well deserved try, conversion missed (0-5).

Es almost immediately scored a second down the right-hand flank but the Ref brought play back for a knock-on. Sadly, George Evans had gone over on his ankle during that passage of play and was replaced by Wil Patterson, great to see him back.

What happened next was quite remarkable with Wil's second touch (his first putting ball in at the scrum) picking the ball up at the base of the scrum, breaking blind side and scoring under the posts all in a matter of twenty seconds, converted by Dom Swann (0-12).

Great start for Es but Clifton however, struck back almost immediately with a drive from a lineout and then scoring next to the right hand upright and converted (7-12).

Es did go on to win the first half finishing with a 3 point penalty kick from Dom Swann. (7-15 Half Time)

The second half started with good turnover ball from Will Tobin but handbags followed and Will and a Clifton player were shown Yellows! Es continued to push hard but following the loss of the ball at a scrum from having initially won it, Clifton broke and spread the ball wide, using the full width of the pitch to score under posts (14-15).

Despite Es having the majority of the ball the following period of about 20 minutes sealed the match for Clifton II as they took advantage of some sloppy play by Es, skinning Es out wide a few times to push the score up to 40-15.

Throughout though, Es showed good spirit, not giving up and still looking threatening and indeed ground out a hard worked score with Matt Bailey going over for the try and Dom Swann adding the extras (40-22)

And that's the way it finished. A tough second half which didn't reflect the way in which the game had largely been played out but there was no answer to the 4 breakaway tries, Es clearly needing to reflect and look to cut out so many mistakes which good opposition will always capitalise on!

Attention turns to next week's game at home vs Dings Knights II. 3pm kick off and hope to see as many of you as possible at Hallen to support the 1sts. It is also hoped we will have the first Thundercats XV fixture of the season. 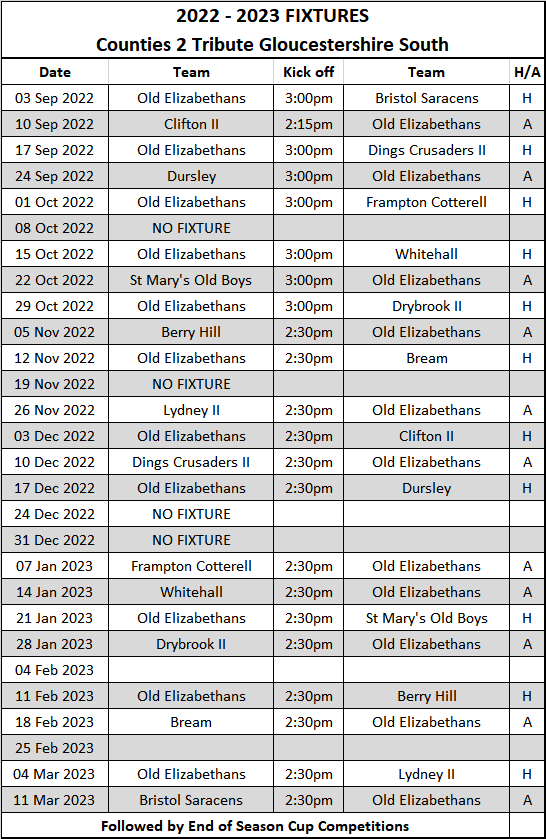