Old Es welcomed Drybrook to Hallen for their first visit in living memory. Es were seeking their 6th win on the bounce whilst the opposition were looking to back up last week's surprising win over Frampton Cotterell.

Es played with the elements in the first half with the strong wind likely to play a big part in the upcoming 80 minutes. Within a couple of minutes of the start a Will Patterson (making a surprise start) kicked ahead, Jagger followed up but the ball beat them all over the dead ball line. A minute later Jagger was deemed to have been held up over the line (against the opinion of touch judge Frank). Not to be denied Tobin then made a break, off loaded to Alex Potts who fed Wil Patterson who wrestled over the line. Jagger converted for a (7 - 0) lead.

Two minutes later good handling between forwards and backs ended with Skyner being held up just short. Moments later a quick tap penalty resulted in Tobias Burden scooting into the corner and Jagger adding the extras (14 - 0).

After 20 minutes Es lost Rhys Edwards to a blood injury which was a shame as he was dominating the lineouts. Burnie then made a trademark burst before off-loading to Patterson for a 5 pointer which Jagger again improved (21 - 0)

Sadly Burnie then hobbled off. A Tobin steal and a Patterson break then resulted in a debut try for Gilbert Blocksidge - Jagger again did the necessary (28 - 0).

From another Patterson turnover, Tobias again scampered over and unsurprisingly Jagger again converted (35 - 0).

On the half hour Matt Hudson made a storming break, Pat Dore continued the move before putting Jagger over, a try that he also converted (42 - 0).

Es were now playing with supreme confidence and scored another 2 tries before half time through Patterson and Will Tobin - Jagger surprisingly missed one conversion to make the score 54 - 0 at the half time break.

Wil Patterson, who had a storming first half with his trademark breaks and huge tackles, was replaced at the break by Sam Hygate who was instrumental in the first try of the second half which was consummately finished by Pat Dore (59 - 0)

Potts was then harshly yellow carded for an offence at the breakdown. Playing into the wind Es continued to run the ball with several of the front 5 forwards showing their wider skills. On this occasion Lucas made a 30-yard break resulting in Will Appleton strolling over (64 - 0).

Another sumptuous handling movement followed resulting in Jagger crossing the line and again adding the extras (71 - 0).

The game was now getting a bit scrappy, over confidence perhaps creeping in and a few handling errors stemming the flow. Into the last 10 minutes and with Patterson back on, he sent Jagger in which he then converted (78 - 0).

Into the final 5 minutes Es had the opportunity to score from a driving lineout (which they had done the previous week) but more in keeping with years gone by, the lineout was lost. The last play of the day resulted in Tobin and Jagger making colossal yards before feeding Rhys Edwards (who was now back on) who cantered into the corner from 30 yards (83 - 0).

Fair play to Drybrook who never gave up. Their large pack of forwards competed at times but their backs were out classed.

Everyone for Es played well - most of the backs handled well and made many yards. The pack fronted up well and were ferocious in the loose. Special mention to both props (Lucas and Houlder) for scrummaging well and being promising in the outside channels. Also, congrats to Rob Lee for a very polished all round performance

Man of the Match: Lucas Sadler 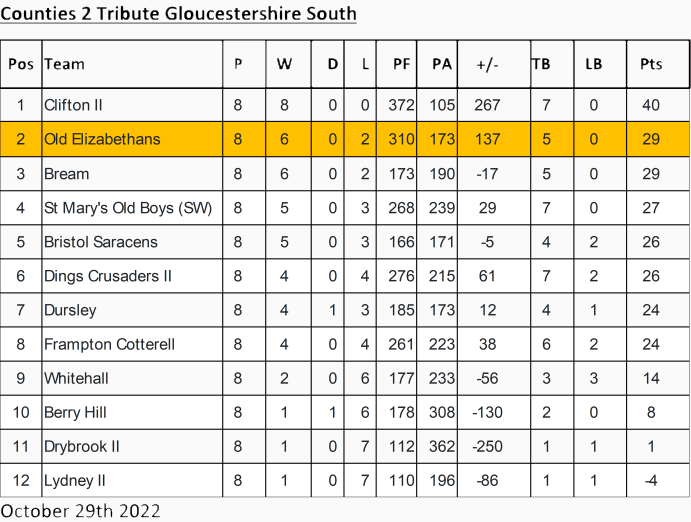 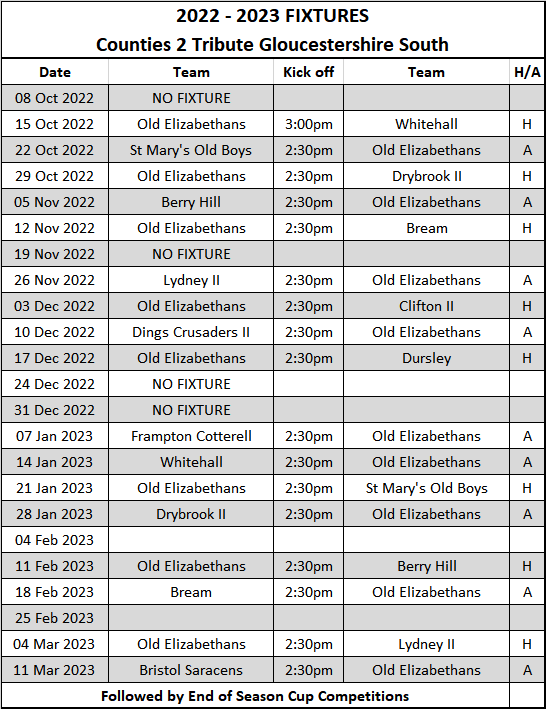