Another cracking win for OEs Berry Hill RFC, tucked away in the Forest of Dean, was a formidable side in their day and this was probably Old Es first visit to this ground.

A few changes to the squad from last week's easy home win against Drybrook II with Benji Wagstaff back in and Jakob Harding making his 1st XV debut. A big thank you to the few hardy travelling supporters, Greg Foord's parents, Malcolm Davies, Nigel Jagger, Dai Edwards for what was to be a wet and windy afternoon.

MATCH REPORT: Es were due to kick into the strong wind in the first half and it would be interesting to see what tactics Es deployed. The Referee had already warned that he would be noisy and expected players to respond accordingly to his instructions. Es started well and were clearly looking to work the ball to suit the conditions, the scrum looked solid with Sadler, Bailey and Burnie working well together, although the lineout struggled initially primarily due to the wind. An early penalty awarded to Es laid down their intentions for the opposition as a kick from just outside the 10m line was narrowly missed by Sam Hygate. However, Berry Hill kicking with the wind took the lead (3-0) following their own successful penalty kick in front the posts.

It was encouraging to see Es trying to play the conditions and getting some success with the centre partnership of Will Appleton and Alex Potts working well. The forwards were working well together and the backs attempting to get some fluency in their passing despite the wind. Berry Hill started to use the conditions to their advantage with their No.10 kicking well and Es didn't help themselves being marched back 10m for back chat with the referee. Berry Hill won their resultant lineout but then threw it away under pressure from the Es' Blue Wall defence. Es were harassing the Berry Hill attackers and being successful notably through Alex Potts' good clearance kicks, Will Tobin good pickups at No.8 and strong drives from him and Lucas Sadler.

Es were awarded a penalty 7m out and very nearly scored but the ball was held up but Es had been awarded a penalty and a quick move from Es saw the ball spread wide and good hands from Dom Horn saw him storm over the try line followed by a fantastic touchline conversion from Sam Hygate (3-7).

No sooner had Es reset, than a few mistakes saw Berry Hill's right winger score in the corner, not converted (8-7).

Will Tobin continued to apply pressure through a quick penalty but knocked on in a tackle, Ben Wagstaffe was impressing with some good runs and Rob Lee impressing at the breakdown. Despite the wind Es were able to share a certain amount of to and fro kicking as each side looked for territory. Five minutes from half time Es seemed to step up a gear and came alive with some good moves pushing Berry Hill back and a good move saw Jagger put Pat Dore through for an unconverted try (8-12) to give OEs a half time lead. 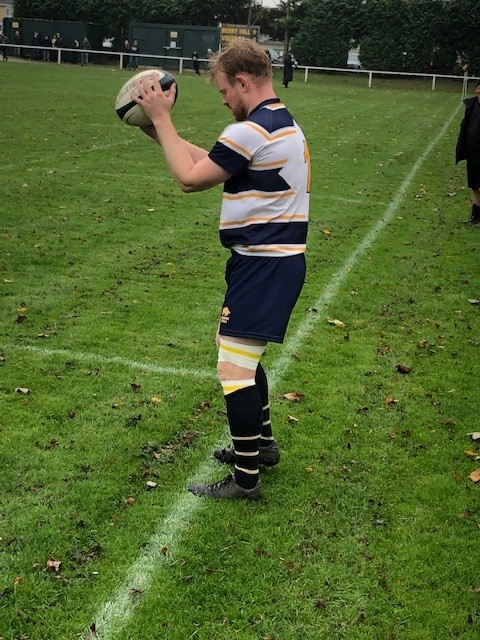 use the wind themselves. An early second half kick through from Alex Potts was followed by a penalty kick to the corner and a lineout which Rhys Edwards won well, then Fly Half Matt Carr floated an impressive cross field kick and Pat Dore pounced sliding through to touch down for Es third try, not converted (8-17).

Es rang a few changes, Hudson off, but the scrum struggled a little thereafter, Jakob Harding came on for his back row debut. Es continued to push Berry Hill back into their half at every opportunity. Es' front row went up in the air at the next scrum but Will Tobin picked up at 8 and drove for the try line and despite four oponents hanging on to him he went over for Es' bonus point try under the posts, converted by Sam Hygate (8-24).

Greg Foord and Will Patterson both on for Es and Matt Hudson back on to shore up the scrum. Es' defence continued to punish Berry Hill with some great tackles from Jakob Harding, George Burnie and Wil Patterson, the latter two in a joint try saving tackle but Patty was adjudged, by the referee, to have led with his shoulder and after only 4 minutes he was shown Yellow, a really consistent situation one might argue, but perhaps just bad luck!

Berry Hill were not finished and scored a well worked try and conversion to bring the score back to (15-27).

Despite this Es looked in command and a good kick through by Alex Potts nearly gave Pat Dore his hat-trick of tries. The referee brought Es back for a penalty which Sam Hygate slotted between the uprights (15-30).

The small supporting contingent roared as Greg Foord exploded running 30m to set up the ball well and the recycled ball fed to Luke Jagger who went over in the corner, not converted (15-35). With about ten minutes to go Wil Patterson back on now, won a Berry Hill lineout and took Es back into Berry Hill's half. Unfortunately, a their players had to be assisted from the pitch after what looked like a serious leg injury. Patty then destroyed the Berry Hill scrum half and the ball went loose, scooped up by Will Tobin who needed no second invitation with an easy run to the try line plus a Sam Hygate conversion (15-42).

Second Rows are not renowned for kicking the ball but Matt Hudson had an impressive kick through and chase! Following a quick Es' penalty Benji Wagstaff was put through for a good try, not converted, to finish the game with an impressive score line away from home (15-47).

Es had been made to work hard to get a good result but immediately attention turned to next week's game when Es welcome Bream RFC to Fortress Hallen a clash of 2nd vs 3rd in the Table. A real test of where we are and what we have achieved. Please try and get down to Hallen to support. Well done Es a really impressive performance in the conditions! 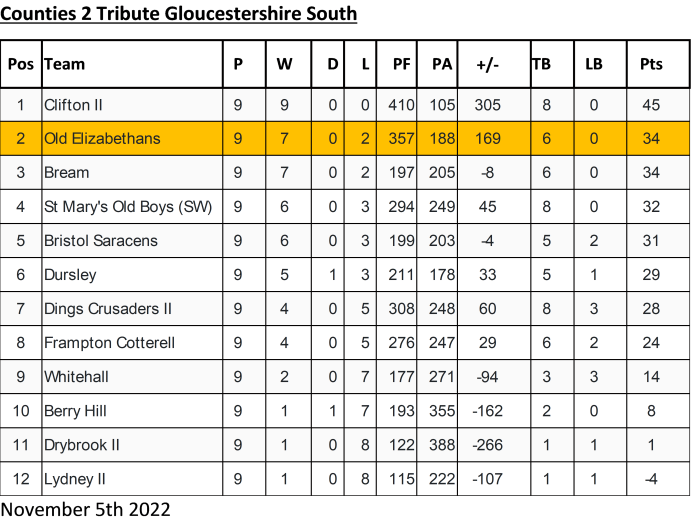