With the recent rains the Frampton pitch was sodden which probably made it heavy going for both teams but the weather was to play a further part in this game! Today Kit Douel was making his well-deserved 1st XV debut. In addition, a warm welcome back to James Brooke, bolstering the front row! A minute's silence preceded kick off to mark the passing of a Frampton Cotterell Old Boy.

MATCH REPORT:
After the turkey and tinsel Es were looking to put behind them the bad starts in the last two games where they ended up chasing the game and narrowly losing out to Clifton II and Dursley RFC. Unfortunately, this wasn't to be the case. Within the first couple of minutes the referee missed a blatant Frampton forward pass on their right wing and they shipped the ball out to the left wing and scored in the corner, not converted, the Frampton No.10's kick hitting the post (5-0).

They increased their score soon after, as Es gave away a kickable penalty, as they struggled to get into the game (8-0).

The Es' spectators wanted Es to hold onto the ball but too often the OEs insisted on kicking to the opposition allowing them to attack and their No.5 streaked round the blindside of a maul and went over for a further unconverted try (13-0).

It then went from bad to worse as Frampton further punished Es straight from the restart again storming through on the right wing to score another unconverted try (18-0).

After 24 minutes many began to question whether the game was now beyond Es, but signs of an improvement started to bubble to the surface as Es tried to get into the Frampton 22 for the first time. The spirit, confidence and belief of the Es was clearly there to be seen but two Es' injuries in quick succession saw Alex Potts and Rob Lee replaced by Dom Swann and Wil Patterson. A good run from Adam Skyner threatened but a dropped ball brought an end to that move and then as Frampton attacked again Kit Douel put in a try saving interception, and George Burnie stole the ball well on contact as more positive signs emerged.

Just before half time a great run from Luke Jagger almost had Kit Douel in for a debut try. Was this the start of a great comeback?

Es were awarded a Lineout just outside the Frampton 22, well taken by Rhys Edwards and Es' forwards drove the full 22 for Jack Houlder to score a superb try. The conversion crept over the bar from Sam Hygate as Es went into Half Time losing (18-7).

The end of the first half was repeated shortly into the second half when another Rhys Edwards successful catch at the line out saw Es' forwards and most of the team shove Frampton back for another catch and drive try by Jack Houlder and conversion from Sam Hygate (18-14).

Suddenly Es were back in the game. As mentioned, a little earlier the rains had returned and it was Es that had certainly responded better using it as an advantage as Frampton spirits were dampened. Es continued to press and from the back of the maul a move involving Wil Patterson and Luke Jagger then put George Burnie in for the try almost under the posts, again converted by Sam Hygate putting Es ahead for the first time in the match (18-21).

A great comeback but with 25 minutes to go what would happen! Es continued to press and were spending most of the time in Frampton territory. The pressure saw the referee award Es with a penalty on the Frampton 22 almost in front the posts and the kick was coolly slotted between the posts by Sam Hygate putting Es 6 points clear at (18-24).

Pat Dore looked to be through on the left wing but was brought back for a knock-on!! Es then got pinned back with a scrum on their 22, living dangerously in the last ten minutes. Frampton then had a 5m lineout but messed it up then recovered the ball well as the Es' Blue Wall stood firm with some great tackling from the likes of Wil Patterson. However, Frampton continued to camp in the Es 22 and finally broke through the defence for a good try about 8m left of the Es left upright (23-24).

This left Frampton with an easily kickable conversion to snatch the game from OEs. So, it was all now down to the Frampton's No.10 for the conversion having missed all his previous kicks. However, this was such a kickable conversion it was odds on he would get it. Es charged the Frampton kicker and he unbelievably missed the kick, slicing it to the right of the right post, and a great roar went up from Es' players and supporters alike and, as the full-time whistle went, Es had the narrowest of wins confirmed (23-24).

Once again, Es had given themselves a mountain to climb giving Frampton an 18-0 lead but once again, as we know, the game is not over until “The Fat Lady Sings", and wow did she sing! A great comeback by Es, well deserved, well done to all involved. Next Saturday, 14th Jan we are away to Whitehall RFC a 2pm KO.

Man of the Match: Jack Houlder. A good game at Prop capped by two excellent tries. 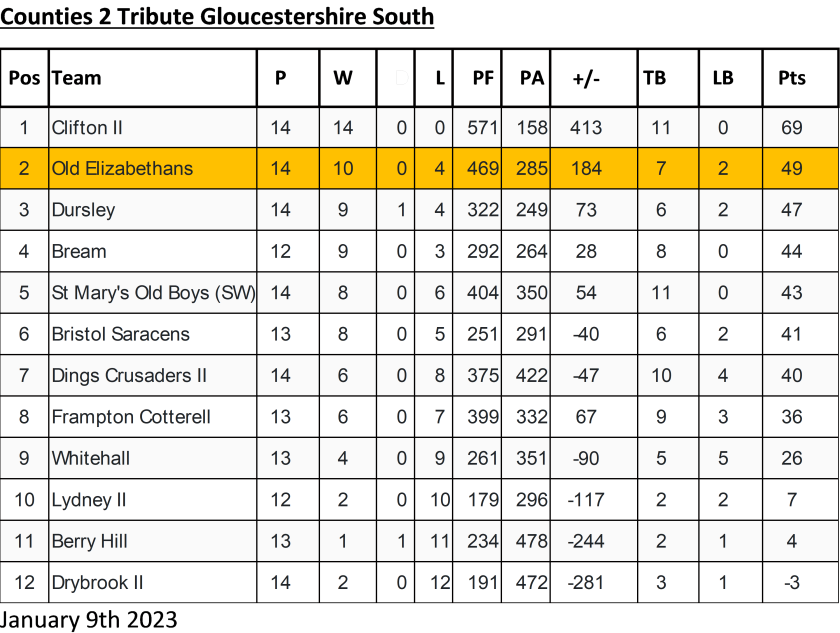 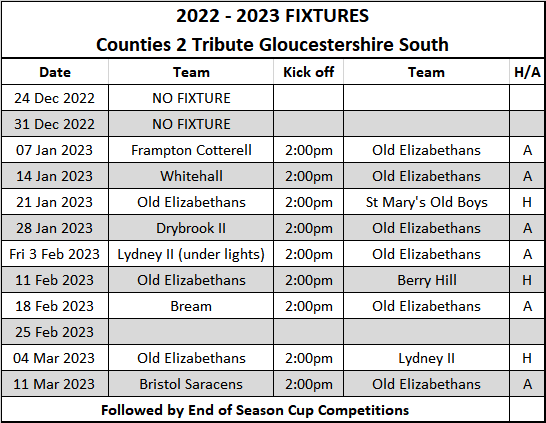