This week with the pitch at Fortress Hallen looking in splendid condition, a cool sunny afternoon saw Old Es' 1st XV welcome Old Richians RFC in what was being billed as a “Must win Game”. This no doubt contributed to a larger than normal crowd together with a good number of following supporters. Meanwhile The Thundercats were involved in a tough fixture just up the road against Clifton 3rds. Old Es were also pleased to welcome back its resident linesman, Frank the Tank, after his hernia op ready to resume his duties as a touchline official. At Hallen a good afternoon was had by all watching the match in the sunshine.

On paper it looked as if these two teams would be fairly evenly matched, however how would Es fair with the changes necessary due to injuries, a good opportunity for some to shine. However, within the first five minutes the Old Es supporters were stunned into wondering whether this would be the case when Richians bulldozed their way to the try line, but missed the conversion to give the away team a (0-5) lead.

The question on everyone's lips now was how would Old Es respond? Shortly after the Richians No.1 prop was replaced due to injury but the scrums continued to be fairly evenly matched giving both teams a good steady platform to build off, however the Old Es line out was not functioning so well and this could be telling!

After some stalemate and about 15 minutes into the game Es started to show some promise and sprung into life. However, it took a fortunate knock on by Richians inside the Es' 22 before anything key happened and before we knew it Es were down scoring a good try through Luke Jagger who then added the further two points to give Es the lead (7-5). 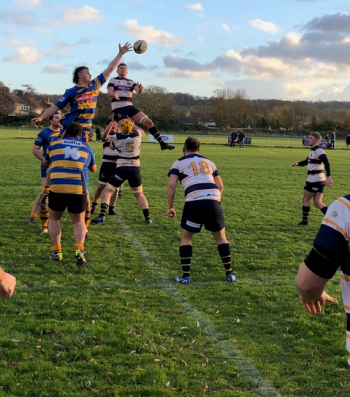 Whilst retrieving the converted ball from the next field at the clubhouse end Es broke out within seconds of the restart and sorry I missed what happened other than to say from what I was told it was a good try finished by Ben Barnett and Luke Jagger added the extras (14-5).

Upon returning from retrieving this converted ball I was just in time to see a great kick through by Will Appleton that eluded the Richians defence and bounced kindly for Pat Dore to score, with Luke Jagger once again extending the lead to (21-5).

Many sides would have folded given they had just conceded three quick consecutive converted tries, but Richians bounced back almost immediately to remind Es they were still here to be counted, a good try not converted (21-10).

Es were then awarded a penalty on their 10m line and Luke Jagger stepped up to take the kick but to the crowds disappointment the excellent kick struck the post. Richians once again tried to claw their way back into the game but the Es' “Blue Wall” defence stood firm. However, on winning the ball rather than taking at least three opportunities to kick and free our lines they tried to run it out and got pinged for a forward pass! Wapps though did put in a great hit on one of the following scrums on his opposite number who then had to retire from the pitch!

Es, for the remainder of the first half, continually soaked up a lot of pressure and whilst almost making good headway kept finding themselves on the back foot. Adam Skyner was having a storming first half as were a number of others but I think there was an element of relief when the Referee's half time whistle went. Half Time score (21-10) Will Tobin at No 8 had a good start to the second half was looking sharp. The play went from 22 to 22 then Es broke down the right hand side a well timed pass from Ben Barnett put Pat Dore through and he put on the gas skinning his man to score a good bonus point try, conversion by Luke Jagger (28-10).

The game continued to ebb and flow and a calamity in the Es' defence could have so easily lead to a Richians try but thankfully the referee blew and brought play back for an Es' penalty. Pat Dore almost found his way through again but for a good defensive tackle which he was unable to ride. Luke Jagger then gave Es a further lead by slotting over a penalty kick (31-10).

Ashe was then replaced by debutant Jack Barry who looked impressive throughout the remainder of the game. Handbags with Richians involving Will Tobin could have gone pear shape but Es' discipline stood firm at this point. Louis Bothamley was showing his silky skills with his dancing feet but once again was thwarted by a determined Richians defence. From this point onwards either the Es' discipline waned or the referee saw something we didn't and with Es being marched back Richians took advantage scoring a converted try from close range (31-17).

Pottsy as acting skipper was having stormer and a great run from youngster Jack Barry showed lots of promise but was stopped 5m out. All of the forwards were putting in a great shift and Rhys slipped the ball to Tobin on their 22 and he skipped through several tackles to score a well deserved try with the conversion from Luke Jagger (38-17).

Great shift from Greg Foord, James Brooke & Jack Houlder in the front row but with injuries to Richians front row Es were now able to make wholesale changes as the scrums went to uncontested. Once again the referee was penalising Es time and time again as Es tried to stop Richians from scoring their own bonus point try. In fairness despite the referee Es' defence stood firm for a long period until Richians did eventually bundle themselves over through one of the heavyweight forwards for an unconverted try (38-22) Other than a mysterious Yellow Card for a good tackle by Louis that's how the game ended.

A good win by Es which was even better as it was quite clear that Richians were not happy!!! Well done Es an excellent performance and a great all round team effort, especially all three of the replacements, Jack Barry, Herbie Gale and George Evans who all very much stepped up to the mark. Not sure how the official score line ended up at 37-24* but perhaps the ref should have gone to Specsavers!
*(Editors Note: I was there and kept track of the score throughout the game and it was definitely 38-22)

Man of the Match: Will Tobin

Next week we have a top of the table clash away to Bristol Saracens so please try and come and support us at Cribbs Causeway. Anyone can play just put together a team of 6-7 players
Or you can join in with one of the OE teams.
Contact Wil Patterson (Captain) by phone or text
Mob: 07715548972
or Email: wil_rhys@hotmail.co.uk
ALTERNATIVELY, COME ALONG TO FORTRESS HALLEN AND CHEER ON YOU FAVOURITE TEAM
2 Severn Rd.
Hallen.
Bristol BS10 7RZ