After last weeks victory at home to Old Richians RFC the final two games of 2021, the half way point of the season, would give an indication of how Es might finish their first season in the Glos Premier League. This week would be a real challenge against Bristol Saracens RFC a team that we haven't played competitively for many many seasons and I can't remember when we have enjoyed a victory against these league rivals in a local derby!

With another reshuffle in the front and back row of the pack securing good ball for an exciting set of backs, would be crucial. The young back row of Rhys Edwards, Herbie Gale and birthday boy Ashe Raymond-Barker had all started well and had showed some early pace with the ball in hand. At approximately the 10 minute mark Ben Barnett earned a penalty 30m out and chairman Dom Swann coolly stepped up and slotted the ball between the posts to earn Es a (0-3) advantage.

The early intensity was encouraging with the backs being well supported by the forwards earning Es another penalty on the 22m line and Dom once again coolly extended Es' lead to (0-6).

At the restart 2nd row Adam Skyner was taken out with a flying Saracens player and the opposition were marched back 10m but the ref seemed to take the easy option of not producing a card! The Es' scrum was under immense pressure but the line out was going well. Great carries by Herbie Gale and Adam Skyner led to a further Es' penalty but the kick was not successful. 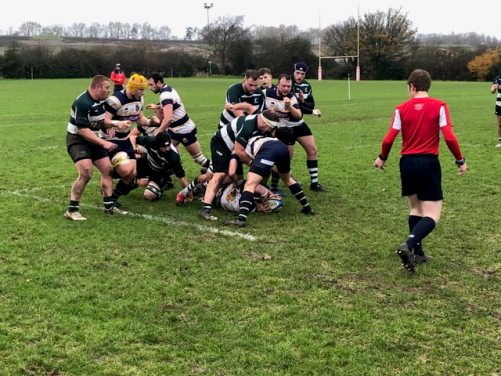 A great forwards move down the left hand side superseded some great attacking rugby which led to a three quarters move with the final pass to Dom Horn loitering in his former wing position, and Dom went over for a great team try which was then added to by a superb kick from Dom Swann (0-13).

Could this impressive start by Old Es be maintained was the question on everyone's lips? The answer would perhaps be determined very soon. Es then sustained some strong Saracens pressure from two successive 5m line outs, pressure short-term relieved by a great break out from defence by Luke Jagger but Saracens now had their tails up and following a 5m penalty scrum drove over in the corner for a good forwards unconverted try (5-13).

Es were coming under even more pressure in the scrum and were losing lineout ball and once again Saracens capitalised from a driving maul following a lineout and scored again but again unconverted (10-13) and the first half drew to a close.

Whilst Es had a positive start to the second half with some good work from amongst others Pat Dore, Es could have scored but for a fumbled pass out wide on the right wing. Saracens again took heart from this and pushed their way into the E's 22 and once again drove over following a lineout for a converted try (17-13). 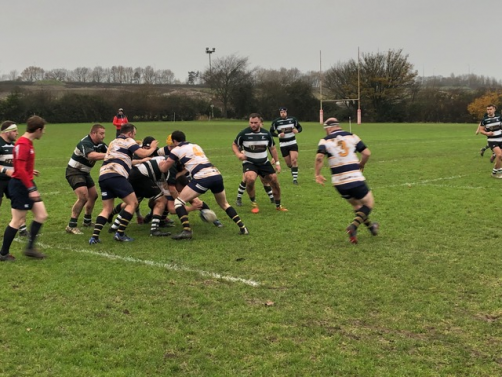 Swann!!! Halpin came on at scrum-half and Appleton moved out to fly-half. Will Leggatt was also introduced to the front row soon after. Es were trying hard but frustratingly through a mixture of mistakes and penalties couldn't quite capitalise on some good moves. Heads could then have dropped as Saracens once again scored a converted try following a lineout (24-13)

But as we know the game is not over until the fat lady sings and Es dug deep as the floodlights came on as the light began to fade. Pat Dore and Herbie Gale had a good move but it was soon after that a good run from Sam Brewer, pass to Ben Barnett saw Ben go over for an unconverted try (24-18).

Whilst things were still bad in the scrum a great pick up and run from Ashe Raymond-Barker led to a try from Pat Dore in under the posts for Dom Swann to convert the bonus point try (24-25).

A one point lead had the good Es support on tenterhooks! With 4 minutes to go Will Leggatt took one for the boys and the scrum went to uncontested. Es had not finished however and once again some great rugby led to a super try with Pat Dore putting Luke Jagger in but not converted (24-30) giving Saracens the option of scoring a converted try to steal the game but a great take from Matt Bailey at the restart seemed to encourage Es even further. Jamie Halpin continued the Es attacking rugby with a great break from a lineout. Alex Potts as stand in skipper had once again inspired the team/squad to a fantastic win as the final whistle was blown. A brilliant effort and one that, for sure, surprised the Saracens team and supporters.

Man of the Match: Ashe Raymond-Barker what a way to celebrate your 19th birthday!

Next Saturday is the last game before Christmas v Cheltenham Saracens RFC - 2.30pm kick off at Home (Hallen) - come and join us to give support.

After the game skipper Alex Potts stated "What a game that was! It was one of the best squad performances for the club I've been involved with. 1-18 people put their bodies on the line and put themselves through walls to get the result. Genuine warrior spirit and heart won us that game.
Massive improvement in discipline and crucially we stayed positive throughout, which kept us in the fight. Then when we got some platform our attacking structure was unplayable. Again running in some of the slickest tries the Old Es has seen. Enormously proud and can't wait for next week."

This input was added to by supporter Andy Tobin , "Just to say, from the Es' spectators, thank you squad for the most exciting game this season, absolutely sensational last 10 minutes, what a comeback, Sarries thought it was all over, until we cut loose....cheers” 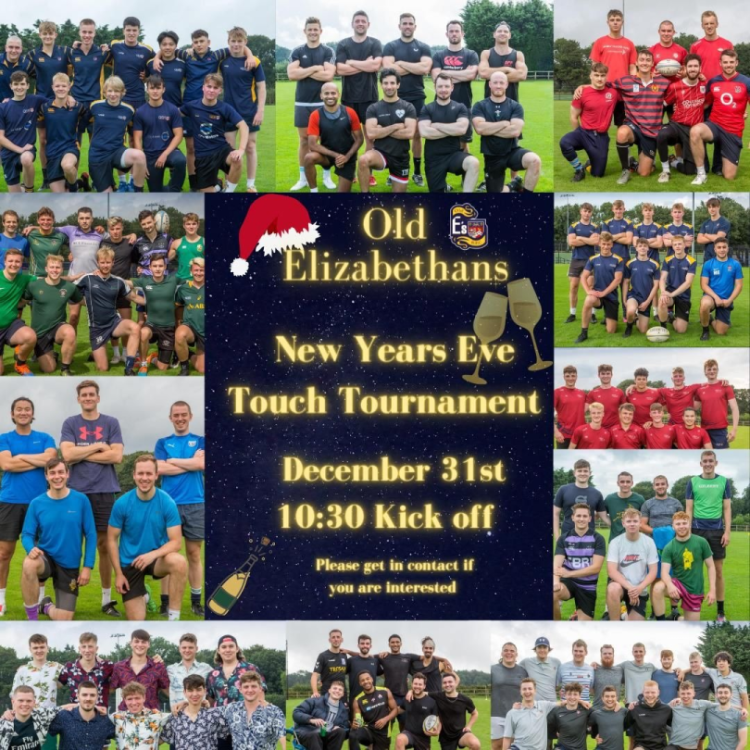 Anyone can play just put together a team of 6-7 players
Or you can join in with one of the OE teams.
Contact Wil Patterson (Captain) by phone or text
Mob: 07715548972
or Email: wil_rhys@hotmail.co.uk
ALTERNATIVELY, COME ALONG TO FORTRESS HALLEN AND CHEER ON YOUR FAVOURITE TEAM
2 Severn Rd.
Hallen.
Bristol BS10 7RZ