You are warmly welcomed to leave a message below, share your memories and celebrate the life of Dr Jim Murray, who we sadly lost in 2021 The funeral for Dr Jim Murray, OE and Past President of the OBS, will be held at St Michael’s Church, Milverton. Somerset on 7th January at 2pm. OEs are very welcome to attend and pay their respects.

Dr Jim Murray sadly passed away, aged 77. He suffered a bad fall in June and, after a four month stay in Somerset Neurological Rehabilitation Centre, passed away on December 5th.

Jim was born in Bristol in 1944 and educated at Queen Elizabeth’s Hospital. He studied medicine at Charing Cross Hospital, London, where he graduated in 1967. Having started training initially as an obstetrician and gynaecologist, four children in quick succession led him to become a GP, and police surgeon, in Norfolk for six years. It was during these years that Jim started publishing medical anecdotes relevant to the general public in his regular slot ‘Dr Bayley’s Casebook’ in Norfolk Fair, while also publishing more scientific articles in publications such as Pulse and the British Medical Journal. He came across multiple intriguing events as a GP and later he wrote stories about these which he published in 2020 in his book Patients, Pills and Partridges: A Country Doctor’s Tales of the 1970’s.

Dr Murray, known by all as “Jim”, with his bow tie and "outstanding laugh that could turn heads”, led to him being described as "a big smile above a bow tie". 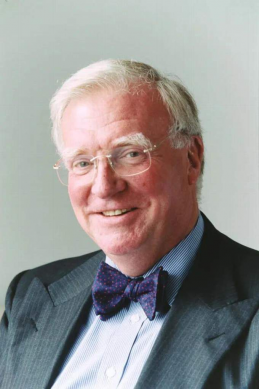 In the late 1970s, he moved to the Netherlands to carry out research and became the scientific director of a pharmaceutical company. At the peak of his career, he co-founded Shire Pharmaceuticals, a company that today employs 23,000 people.

He and his wife Sue, a Westminster nurse, met in London in 1981 and they married in 1983. Sue also became mum to James, Victoria, Duncan and Dominic whilst also having Tom and Toby themselves. Jim and Sue moved to Dartmouth full-time in 2000 after many wonderful family holidays there.

His son Tom said: “Dad quickly involved himself in the local Dartmouth community, singing in the church choir, helping to fund the Flavel project (an  arts centre housing cinema, theatre, library and commercial exhibition space) where he was known as ‘the hero of the Flavel’, helping to raise over £300,000.”

Jim was also an honorary member of both the Dartmouth Rotary and Hauley Lodge, where he was a former master. He helped with the re-ordering of St Clement’s Church, the Devon Opera, and also involved himself with the Dartmouth Food Festival, where he helped pair young, budding chefs with different restaurants, and helped Sue with various Macmillan events.

Tom added: “Dad was very much a people person, and he had a lovely way of getting on with everyone he met. He was always interested in what others were doing and was always happy to give advice or help when needed. He was an inspiring father and devoted husband. In the words of multiple tributes ‘Jim was one of the world’s exceptional people’. Although his death was premature, dad has left an eternal legacy that will continually benefit others for years to come.

The funeral service will take place at St Michael’s Church, Milverton, Somerset, on January 7 at 2pm, with a wake at The Globe. No flowers, but donations to Somerset Neurological Rehabilitation Centre would be warmly welcomed by the family. You are warmly welcomed to leave a message below, share your memories and celebrate the life of Trevor Brooks who we sad… More...