Celebrating the birth of William Friese-Green

Today marks the anniversary of Friese-Green's birth, one of our most notable alumni. William Green was born on 7 September 1855, in Bristol. After studying at QEH, he was apprenticed to the Bristol photographer Marcus Guttenberg, but later successfully went to court to be freed early from the indentures of his seven-year apprenticeship.
He married the Swiss Helena Friese on 24 March 1874, and in a remarkable move for the era, decided to add her maiden name to his surname. In 1877 he set up his own studio in Bath, and by 1881 had expanded his business with more studios in Bath, Bristol and Plymouth.

In Bath he came into contact with John Arthur Roebuck Rudge. Rudge was a scientific instrument maker who also worked with electricity and magic lanterns to create popular entertainments. Rudge built what he called the Biophantic Lantern, which could display seven photographic slides in rapid succession, producing the illusion of movement. It showed a sequence in which Rudge (with the invisible help of Friese-Greene) apparently took off his head. Friese-Greene was fascinated by the machine and worked with Rudge on a variety of devices over the 1880s, various of which Rudge called the Biophantascope. Moving his base to London in 1885, Friese-Greene realised that glass plates would never be a practical medium for continuously capturing life as it happens and began to experiment with the new Eastman paper roll film, made transparent with castor oil, before turning his attention to experimenting with celluloid as a medium for motion picture cameras.

On 21 June 1889, Friese-Greene was issued patent no. 10131 for his camera. It was apparently capable of taking up to ten photographs per second using paper and celluloid film. A report on the camera was published in the British Photographic News on 28 February 1890. On 18 March, Friese-Greene sent a clipping of the story to Thomas Edison, whose laboratory had been developing a motion picture system, with a peephole viewer, christened the Kinetoscope. The report was reprinted in Scientific American on 19 April. Friese-Greene worked on a series of moving picture cameras until early 1891, but although many individuals recount seeing his projected images privately, he did not ever give a successful public projection of moving pictures. In 1890 he developed a camera with Frederick Varley to shoot stereoscopic moving images. The camera ran at a slower frame rate, and although the 3-D arrangement images worked, there are no records of projection. Friese-Greene's experiments with motion pictures were to the detriment of his other business interests and in 1891 he was declared bankrupt. To cover his debts he had already sold the rights to the 1889 moving picture camera patent for £500 (£60,000 in 2016 terms). The renewal fee was never paid and the patent lapsed.

Friese-Greene's later exploits were in the field of colour in motion pictures. From 1903 he lived in Brighton where there were a number of experimenters developing still and moving pictures in colour. Initially working with William Norman Lascelles Davidson, Friese-Greene patented a two-colour moving picture system using prisms in 1905.

He also experimented with a system which he called "Biocolour". This process produced the illusion of true colour by exposing each alternate frame of ordinary black-and-white film stock through two or three different coloured filters. Each alternate frame of the monochrome print was then stained red or green (and/or blue). Although the projection of Biocolour prints did provide an impression of true colour, it suffered from noticeable flickering and red and green fringing when the subject was in rapid motion, as did the more popular and famous system, Kinemacolor.

In 1911, George Albert Smith and Charles Urban filed a lawsuit against Friese-Greene, claiming that the Biocolour process infringed upon Smith's Kinemacolor patents, despite the fact that Friese-Greene had both patented and demonstrated his work before Smith. Urban was granted an injunction against Biocolour in 1912, but the Sussex-based, flamboyant racing driver Selwyn Edge decided to help Friese-Greene by funding an appeal to the High Court. This overturned the original verdict on the grounds that Kinemacolor made claims for itself which it could not deliver. Urban fought back and pushed it up to the House of Lords, who in 1915 upheld the decision of the High Court. The decision benefited nobody. For Urban it was a case of hubris because now he could no longer exercise control over his own system, so it became worthless. For Friese-Greene, the arrival of the war and personal poverty meant there was nothing more to be done with colour for some years. 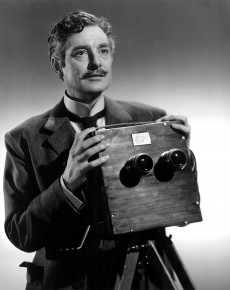 (Portrayed by Robert Donat in The Magic Box)

Sadly, on the 5th May 1921 Friese-Greene – now a largely forgotten figure – attended an important and stormy meeting of the cinema trade at the Connaught Rooms in London. The meeting had been called to discuss the current poor state of British film distribution and was chaired by Lord Beaverbrook. Disturbed by the tone of the proceedings, Friese-Greene got to his feet to speak. The chairman asked him to come forward onto the platform to be heard better, which he did, appealing for the two sides to come together. Shortly after returning to his seat, he collapsed. People came to his aid and took him outside, but he died almost immediately of heart failure.
Given his dramatic death, surrounded by film industry representatives who had almost entirely forgotten about his role in motion pictures, there was a spasm of collective shock and guilt. A very grand funeral was staged for him, a two minute silence was observed in some cinemas and a fund was raised to commission the famous architect Sir Edwin Lutyens to design a memorial for his grave, however his memorial is not designed by Lutyens. This memorial describes him as "The Inventor of Kinematography", a term William Friese-Greene never used in talking about his achievements. He was buried in the eastern section of London's Highgate Cemetery.